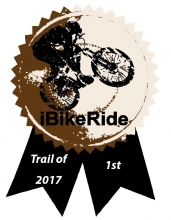 Fancy sponsoring a competition prize for the 2017 Trail and Bike Park of the Year campaign? Great media brand exposure opportunities!

2017 will be the fifth year iBikeRide have run the hugely successful UK MTB Trail and Bike Park of the Year campaign.

Comrie Croft took the Trail of the Year crown last year. The award is decided by the UK riding public and drives significant traffic and media coverage for the winning trail and the sponsors.

The campaign for 2017 kicks off in mid-October and ends at midnight on the 31st December. At the end of each month as an incentive, we offer a prize draw to riders who leave trail ratings and reviews on the iBikeRide site during the campaign. At the end of the year, there is a special prize for the rider who contributed the most to the campaign.

Then we aggregate all the rider ratings and reviews written throughout the campaign. These scores create the winners and runners-up. The winning trail and the runners-up are announced on the 1st Jan.

HOW TO BE PART OF THE SHOUT?

We are offering businesses and groups like yourself the opportunity to get involved by sponsoring some prizes. These can be big or small. They can be one of the prizes we give away each month or you can look to sponsor the top rider who contributed the most at the end of the year.

We generally look for one main prize sponsor and then up to 5 to 7 co-sponsors depending on prize makeup.

WHY BECOME A SPONSOR?

In return, you will be rewarded through brand association and the exposure from our marketing campaign activity that is advertised site-wide and through social media campaigns. Your brand will sit on the campaign page, on the trails pages site-wide, the fortnightly newsletter and all associated press releases.

The campaign aims to reach over 50,000 users to the site each month, all from active mountain bike riders. In addition, there is the much broader external PR reach from the MTB, local and national press.

As well as this media exposure for yourselves there is, of course, the benefits from associating with a rider driven, authoritative, grassroots brand.

We also offer you a campaign widget for before and after the campaign, you can use to associate and promote the campaign on your site if you wish.

Interested? Get in touch This email address is being protected from spambots. You need JavaScript enabled to view it.