The Team and the Plan behind Sheffield's Indoor Bike Park 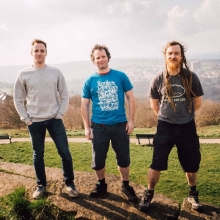 In case you have not heard, there are exciting plans afoot for an indoor bike park in Sheffield. The team had found a perfect building but as of August 2017, we have just heard it has fallen through. Hopefully just a temporary setback as they search for a new spot. They are also in the process of getting together a crowd funder.

We caught up earlier in the year with one of the key movers and shakers behind this project James Folkes to find out more and see how the riding community can get involved and help.

So, who are the team behind Sheffield Bike Park?

James is a skilled tradesman and now the full-time project manager at Sheffield Bike Park. He is one of the three key players in this founding team. He is working alongside George French a bicycle design engineer who founded G-Sport BMX and Steve Rimmer a Socially responsible entrepreneur who has set up numerous Sheffield arts and entertainment based businesses including the hugely successful Creative Arts Development Space Trust (CADS). In my experience, the future success of any project is the right team. This team clearly have strong credentials and the right mix of skills for an ambitious project of this magnitude.

How did the project come about?

James shared with us how the project kicked off:

"George had also been knocking around the idea of an indoor park around for a couple of years, but never found anyone quite committed or sufficiently available to go in on it with him. I was wanting to build a facility similar to Burlington Bike Park (indoor dirt jumps over in Washington state) and following being made redundant from a Design and Technology teaching technician's post in a local secondary school, decided that now was the time. That was a while ago, and there was a lot of research into dirt and large industrial buildings that followed. Then when chatting about it to one of my riding pals who knows George of old and when he was attempting to gain a lease on an old foundry building in Sheffield around the middle of last year, he introduced us to each other. The two of us got together to visit the building, quickly established our shared goals and decided to work together."

James over the last five years has also formed a working relationship with Steve Rimmer, who brings his expertise in social enterprise finance, government and operation to the fore, and with that the management team was complete.

What stage is the project currently at?

Well although the Foundry building they were reviewing fell through, they persevered and are currently negotiating terms on another exciting building ideally positioned to serve the urban population of Sheffield and well connected enough to be a valid destination for those further afield. They hope to announce a partnership with a well-established ramp building company soon, so prospective users can be assured of the quality of workmanship they will be able to find at the park.

"We have been doing a lot of planning, costing, researching, re-planning and re-costing, seeking advice, making connections and generally laying the framework for this project. Interested parties and volunteers have started coming out of the woodwork now we have gone public with our scheme, and the initial expressions of interest and support have been incredibly positive and encouraging; this is definitely a thing that people want!"

"As you will probably know, there isn't really a thing like this in the United Kingdom, and actually, the way that we are planning things, it will be a bit unlike the offerings across the pond and over on the continental mainland. What will be driving factors though when designing and refining the features and layout of the park are fun, flow and progression? We are confident we will offer not just an entertaining place to ride, but a relatively controlled environment where users can develop skills and gain confidence on their bikes, whatever their current skill level and discipline.

Imagine a big cavernous space full to the rafters with fun stuff to ride silly bikes on. A place where you could learn skills, get even fitter, meet friends, have a laugh, take a break in a cafe and not worry about weather or access rights or walkers or cars or horses or landowners. Wouldn't it be nice if there was a range of terrain including climbs and descents, pump track and trails, big jumps and little jumps, and even a wooden bowl. A cafe. Bike hire. Video screenings. Barbeques."

"The crowdfunding aspect of the project is mission critical. Getting this project off the ground will require more than the director's loans we are able to putt nto the business themselves."

Crowdfunding has proven successful in projects like these and for contributing to the initial outlay cost, riders who help fund are generally rewarded in turn with membership, sessions, exclusive features and cool merchandise. They hope to be launching their crowd-funding campaign as soon as they have an agreement on a building.

How can the MTB community help?

"The best way the MTB community can get behind the project now is to spread the word far and wide, to make sure that all our prospective backers are ready and champing at the bit when time comes to raise that money."

You will have heard iBikeRide report quite a bit over the last couple of years, on similar plans for an indoor bike park in Manchester driven by the team at Dirt Factory. It looks like there may be a race to see who gets there first!  Two indoor bike parks in the North feeding two large urban populations would be pretty awesome. iBikeRide thank James for his time and wish him and the team at Sheffield Indoor Bike Park the best of luck and our full support. We will keep you all informed of the plans as they progress.

Already have an account? Log in now
Update from the SBP team: August 2017
September 02, 2017 (Updated: September 02, 2017)
We've been busy over the summer getting closer to our dream of all-weather facilities for MTB and BMX in South Yorkshire. Our goal of opening this coming autumn will now not be met as we have hit another legal complication with the building we were negotiating lease terms on, or to be more accurate, the land upon which that building was erected.

Anyone who has dealt with commercial property (or even just tried to buy a house) will probably feel our pain, but it is part and parcel of the process so we are not letting it dampen our spirits too much. The foundry building we wanted could be in limbo for anything up to two years whilst the legal wrangling over title deeds is played out; we have not given up on it and are still pushing for a solution, however the practical upshot is that we are back to looking for and at alternative sites.

With new sites come new possibilities for different terrain, methods of construction and scope of content. Our determination remains steadfast, and a recent “board meeting” in a very soggy Grenoside Woods (along with Met Office prediction that it will rain all August long) has reminded us how relevant the Bike Park will be all year round, not just for our cold and wet winters.
In the meanwhile, watch this space (and tell your friends!) as we move closer to the critical crowdfunding campaign, which we will launch just as soon as we have secured the Bike Park a home.
S
stumpy_dan #1 Reviewer 89 reviews
Report this comment Comments (0) | Was this review helpful to you? 0 0