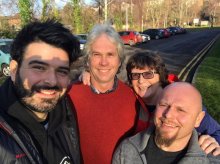 The Black Mountain Cycle Centre has become one the country's leading downhill mountain biking destinations in the short time it has been open. What initially started out as a few friends building some tracks through newly planted woodland has evolved into a place that attracts visitors from all over the world. The centre was faced with having to apply for retrospective planning permission due to the unforeseen growth and success of the business in the last 18 months.

The bike centre has been a positive farm diversification in which existing woodland has been transformed to provide enjoyment to thousands of mountain bike enthusiasts as well as stimulating the local economy with local pubs, shops and B&B’s profiting from the extra people in the area. The bike centre also creates jobs within a community that is finding it increasingly difficult to make a living from agriculture in the local area.

If planning permission was not granted there was a possibility that the centre will be forced to close resulting in a loss of jobs as well as a significant loss of income to the local economy.

BMCC has quickly established itself as one of the best riding spots in the UK, World Champion riders have used the centre and it's trails as preparation for international events and competitions. As well as catering for the needs of elite riders, the centre offers younger, up and coming riders the opportunity to use BMCC as a training facility to practice and develop their skills. There was a real risk that all of this will be lost if planning permission is not granted.

They asked for us to support the BMCC to remain open and sign the petition. Many of you did. Thank you. It worked! Never forget we are one community.

Already have an account? Log in now
Update Black Mountains Cycle Centre Saved!
December 20, 2016
The BMCC were successful in being rewarded retrospective planning permission! Positive result at The National Park. Happy Days! Big thanks to all who support.
S
stumpy_dan #1 Reviewer 89 reviews
Report this comment Comments (0) | Was this review helpful to you? 0 0