iBikeRide.com are delighted to announce that the winner of the UK Trail of the Year for 2017 is Wind Hill B1KEPARK.

Wind Hill B1KEPARK can be found in the Longleat Estate in Wiltshire. It was previously known as the Allotment and the Black Cannon trails.

It went through a major revamp in 2016 and re-opened as part of the growing B1KE network to become Wind Hill B1KEPARK in April 2017. Hence, it is a new kid on the block to many, as well as having a rich history to many.

It is a progressive bike park catering for all levels of riders offering a variety of trails ranging from flowing blue grade to pro freeride and expert downhill.

Wind Hill B1KEPARK take the crown from last year’s winners Comrie Croft, who are now in second place followed by Bike Park Wales in third place (who also won in 2015). The list of the Top Ten Trails of 2017 are published below:

The Trail of the Year winner is driven by an Index based solely on rider reviews. Of the fantastic choice of 327 UK trails, bike parks and tracks available to review and rate on iBikeRide the Top Ten trails above (which is only around 3% of the total network) account for a whopping 26% of all reviews written (i.e. 683 out of the 2635 reviews that make up the index), showing just how popular they are amongst the riding public.

Of the top ten winners 4 are found in England, 4 in Wales and 2 in Scotland.

The specific winners on a country by basis are as follows:

It’s great to see Richard Kelly, the B1KE team and the Wind Hill local community get the credit deserved by taking this years Trail of the Year crown. As we see every year the opportunity for progression as well as the welcoming nature of the local riding community are the two things most valued by the UK riding public and Wind Hill B1KE have that in buckets.

Looking further into the top ten trails we can see that Revolution Bike Park, Gawton Gravity Hub, Foel Gasnach Downhill, Western Park and of course Wind Hill B1KEPARK themselves are all in the top ten for the first time this year. All of these are Bike Park and Downhill orientated centres which emphasises the continued trend we see in popularity in the iBikeRide Index for these type of riding venues over the more typical XC orientated centres.

One of this years stand out stories has to be Western Park in Leicester. Standing proudly amongst the Goliaths of the UK trail network is this small (comparatively tiny) and progressive bike park frequented by both mountain bikers and BMX’ers alike. Found in a small corner of a public park in an urban setting is a true hidden gem. I’ve visited and it probably has one of the friendliest and most helpful communities in the UK. Punching above their weight they come in 4th in the UK and second in England. Their position is a testament to both them and also the power of the iBikeRide Index as a solely grass roots community driven campaign to help riders discover the best trails and bike parks in the UK.

Massive thanks to everybody that reviewed a trail and an equally massive thanks to all our generous sponsors (below) for their support of the campaign which is now in its 5th year. To celebrate 5 lucky reviewers will be chosen from a prize draw over the next week to win a host of prizes from our sponsors.

As a final note, I wanted to explain how the iBikeRide Trail Index that determines the Top Ten Trails of the Year works. Basically, the index dynamically adjusts every time a rider writes a new review and leaves a rating. The algorithm that drives a trail's eligibility into the index, as well as its relative rankings, is a combination of a) the average rating score of the trail b) a minimum threshold on the number of ratings and reviews a trail has c) and freshness i.e. a significant number of reviews need to have been written in the last year. The Index then uses a Bayesian Average which generates a score for each listing that takes into account both the average rating and the number of reviews.

The criteria above means it’s really hard (with an ever-increasing bar throughout the campaign) to even qualify for the index let alone be in the top ten or win for that matter. So congratulations again to Wind Hill B1KEPARK winner of the 2017 Trail of the Year.

Don’t forget you can start writing reviews from today to decide the 2018 winners. It’s never too early. Who wins? You decide! 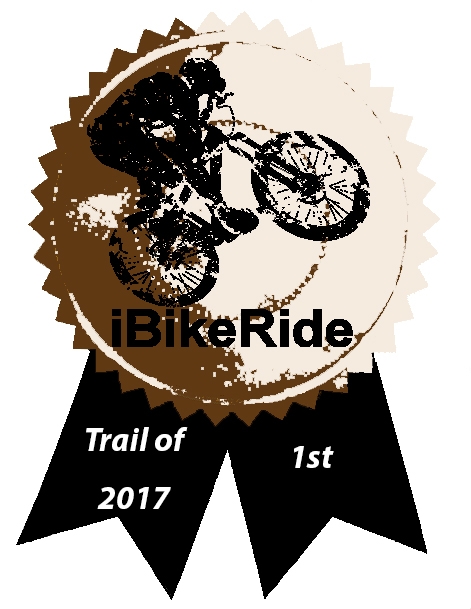